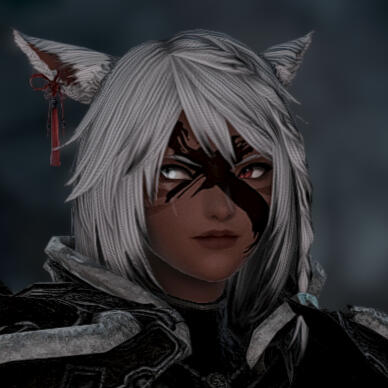 Full Name: U'bonsi Beloved
Race: Seeker Miqo'te / Lost Hrothgar
Age: 29
Height: 6 fulms, 2 ilms (6'2"/188cm)
Pronouns: He/Him/They/Them
Alignment: Chaotic Neutral
Birthtown: The Forgotten Springs
Home: Unnamed Island (current)
Orientation: Demisexual/Panromantic
Nameday: 31st Sun of the 5th Umbral Moon
Guardian: Rhalgr, the Destroyer
Jobs (in character): Warrior, Dark Knight, Reaper, Botanist, Blacksmith, Carpenter
World: MateusPersonality: On the surface, U'bonsi is stoic and brutish, but to those who give some patience and understanding, they are a very passive and helpful individual. Short tempered and unintelligent to most of the world and life, if provoked to believe they are being teased, will become agitated and difficult to converse with. This makes working with others a bit of a struggle, especially due to their blunt nature, but do not let that deter you. They are not against learning, and quite excitedly partake in new things if invited. Should they be given the chance, he is one of the best to have on hand should danger get out of hand. Honest and loyal to those he deems close, they are an immovable and unbreaking wall to push himself and others forward.

Trivia
What is his aether like?
U'bonsi holds an immense amount of Aether in their being and anyone who checks it would describe it like a compressed ball of power on the brink of bursting, but his body is well and otherwise healthy and there seems to be no issue with him having all that Aether. Should anyone need any, they are more than happy to offer his bountiful amount. Those with a more trained eye will realize that the massive amounts of aether he harbors is from bahamut.
What is he like physically?
U'bonsi is noticeably large and bulky compared to normal Miqo'te, and without question is a hybrid with another race. His body is covered in scars of multiple size and age, and across his back are tiger stripes similar to hrothgar stripes. His tail also has the same at the tip.
Can he use magic?
No, U'bonsi does not cast magic. Doing so is extremely difficult to him, as they do not have the training nor the diligence to do so, but also, the amount of aether he contains amplifies any spell he might cast, making it dangerous. So, it's best left that he just doesn't learn.
What's up with his eye?
Basically, when Hydaelyn reached out to bestow her blessing of the Echo on him, Bonsi rejected and fought against it. It partially worked and partially didn't, as what I describe that happened is that he received a "broken echo" which left one of his eyes hot white. He is colorblind completely in that eye, save for being able to see the color of people's aether. Otherwise, U'bonsi has no other Echo capabilities and is prone to being temporarily tempered by certain primals who he can agree to or relate to; the primals so far being Titan, Ravana, and Susano. He is free from tempering once said primal is defeated, but will require some days of rest to recuperate.

- Hi, I'm Tobi, he/him 21+ with only an interest to rp with other adults
- I have no issues with dark, mature or even some disturbing subjects, but please speak to be oocly beforehand.
- Very very new to in-game rp and also just really shy, but I am open to approach to talk to! I used to rp a lot years ago by para rp, but I am long since been rusty.
- Absolutely NO homophobia, transphobia, racism, etc.
- I'm not fond of multiship, but I am not against shipping OCs with friends should the chemistry be good. Please do not pursue my character for romance without my permission, or you will be rejected ICly should you be bold enough to try and blocked afterwards.

WANTED BOUNTY: U'bonsi has had a bounty on his head since before their adventuring began in Ul'dah. Whoever placed the bounty, refuses to take it down, even after their years of work for the Scions and proving himself to the grand companies. Many people have attempted to claim this bounty, and to nobody's surprise, nobody has ever succeeded in completing it.
This bounty is not a real in-game bounty, there is no gil to collect should anyone succeed in defeating him in a fight, but it does make a fun way for introductory roleplayGUARD FOR HIRE: Need some muscle to go with you to some suspicious meeting or to protect your caravan from brutes and thieves? U'bonsi is available for the job should he be contracted.SMITHY: U'bonsi was trained by his adoptive Amal'jaa family on how to smith, and through his travels has honed her craft. They will happily craft you anything you might need (weapons especially)TRIBE ADVOCATE: U'bonsi has many connections to the individual tribal groups dotting the world and can speak their languages fluently. He can serve as a translator or a messenger should anyone need, but if he catches wind that you attack or harm the tribes, you will be made an enemy in his eyes.

Below is art I created of U'bonsi. Whatever he looks like in-game, please keep in mind that this is what his real appearance is!